The Blue Spring, near Putaruru, February 2017.

I’ve written this post to get my head around the multiple, complex issues surrounding water management, that are currently facing New Zealand. I don’t much like using the word “management” to describe taking care of water in a holistic way, but I don’t have a better word for it.

We have international companies jostling to export fresh New Zealand spring water without paying for it. We have formerly beautiful rivers that have become dried up, polluted, slimy rock beds, because too much water has been taken to irrigate intensive agriculture. Anyone who’s driven through Canterbury will have noticed this.

We have a resource management system that doesn’t seem to be able to prevent this from happening. We have a legal system that says water can’t be bought or sold – and yet it is already happening.

New Zealand is long overdue for national leadership on water policy. And the current administration seems most unwilling to do this. This makes me upset and angry. But it appears that Jacinda Ardern’s new Labour Party leadership is now taking water seriously – along with the Greens and Gareth Morgan’s Opportunities Party. And I’m hoping that this is a watershed moment.

It’s easy to get hot under the collar about water. It’s essential to life. Civilisations have risen and fallen over water.

In the James Bond movie Quantum of Solace, some baddies are trying to steal a valuable commodity from a South American country. It’s assumed that it’s oil or some other precious mineral. But it turns out to be – water!

There are parallels close to home. A water industry group calling itself Water New Zealand has been spearheading media attacks on the Labour Party’s policy on water bottlers. The spokesman for Water New Zealand, John Pfahlert, was very recently the CEO of the Petroleum Exploration and Production Association (PEPANZ).

While I’m not suggesting that these groups are James Bond villains, it’s interesting to note that there’s a relationship between oil and gas exploration groups and international companies exploiting New Zealand’s fresh water. It’s not too much of an exaggeration to say that New Zealand’s fresh water is being seen as a strategic international resource. 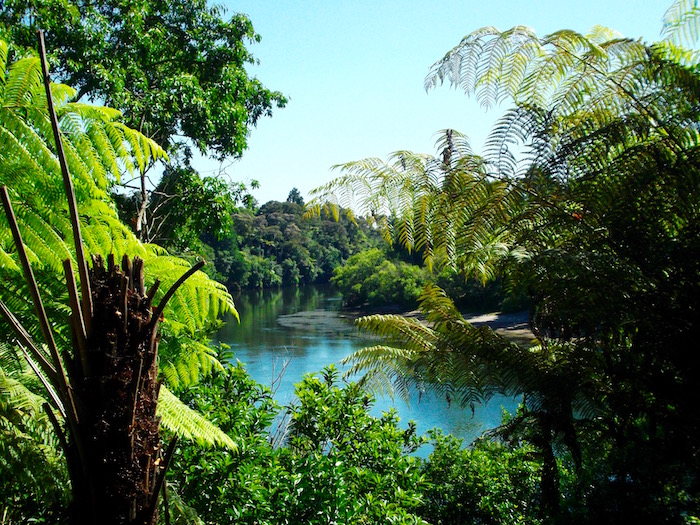 Jacinda Ardern’s first major policy announcement after taking over the Labour Party leadership was aimed at taxing water bottlers, shortly followed by a commitment to make rivers and streams swimmable again. This shows that the new-look Labour leadership recognizes both that water is important – and that it’s a topic that gets people wound up and motivated.

The Labour Party’s water spokesman and shadow attorney general David Parker seems to have his head around water issues. Here’s a link to a transcript of his May 2016 Radio NZ National interview with Kathryn Ryan.

The Green Party could claim, with some justification, that Labour has stolen its water policies. However, I’m really happy that the Labour Party seems to be prioritising water issues at last.

Closer to the water

Moving from central Auckland to the Waikato a decade ago gave me new perspectives on water in the landscape. When I lived in Auckland, water issues meant being annoyed when our local body water supplier became corporatized, rebranded itself Watercare, and started charging us more for water. The town water supply used to be from beautiful clean rainwater reservoirs in the Waitakeres and the Hunuas. But then Watercare started adding water from the Waikato River to our city supply, saying this was necessary to ensure supply in case of drought.

After I moved to the Waikato, I found out about other kinds of water politics. The Waikato region is largely wetland that has been drained and turned into farms. The drainage isn’t just something that happened a long time ago – it continues to this day, and has affected the climate of the region, according to Te Ara-The Encyclopedia of New Zealand.

Most weekends I walk along the Waikato River, which flows through central Hamilton, and I can’t avoid noticing the huge variation in water level, due to hydroelectric generation upstream. There are no fewer than nine power stations on the river. The annual Turangawaewae waka regatta has to make a special application to make sure there’s enough water in the river to float the waka on the festival weekend. 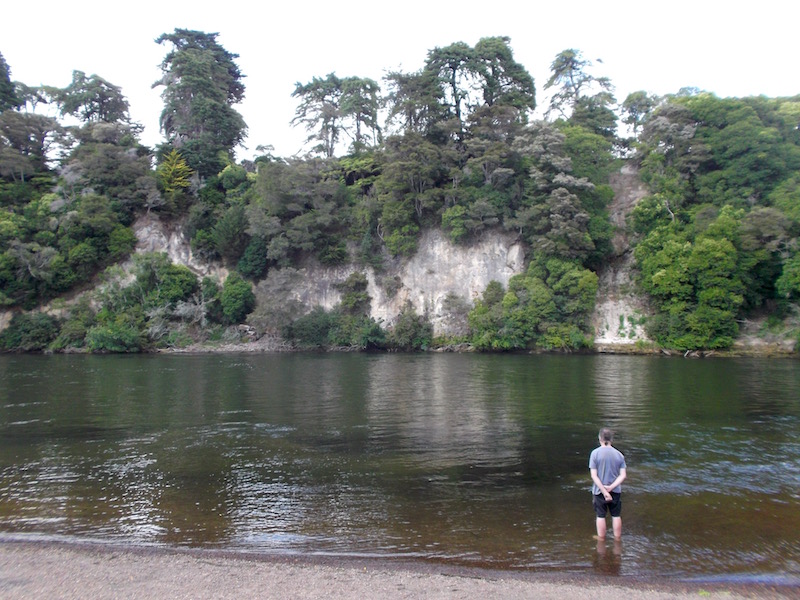 Wading in the water: the Waikato River at Hammond Park.

Throughout Hamilton there are also many gullies and waterways, in backyards and parks. Many locals belong to community streamcare groups. Twenty minutes’ walk from my house there’s the scenic riverside walkway through Hammond Park, where the Riverlea Environmental Society holds regular working bees and planting days. (It’s a buzz to walk through the park and see that trees I helped to plant are thriving!)

David Young, author of Rivers: New Zealand’s Shared Legacy (Random House, 2013) has described local streamcare groups as an exciting, under the radar social and environmental movement that brings together people from all walks of life.

The legal status of water

Legally, in New Zealand, water is owned by all of us. In theory, water can’t be bought or sold. The money we pay for our town water supply is for the supply system, not for the water itself.

Commercial water bottlers pay for the right to take water from a spring – not for the water itself. But a scenario where some people can take water (because they have a resource consent) and others can’t is a quasi-ownership model, however it’s described. And the water that bottlers take is then sold in bottles as a commodity. Clearly, water has already become a saleable commodity. The horse has bolted.

The Treaty – no excuse

The present government seems to be using possible future Treaty of Waitangi claims as an excuse for its non-action over a national water policy. National Party minister Chris Finlayson claims that Treaty issues are a big concern with Labour’s proposal to tax water bottling.

I think this is at best a lazy excuse.

In principle, there is a case for customary Maori ownership of water via the Treaty of Waitangi. In 2012 the Waitangi Tribunal ruled that Maori have rights and interests in water. But so far this has not been supported by court decisions.

In 2013 the Supreme Court ruled in favour of the Government’s right to sell Mighty River Power, despite local iwi claims to the Waikato River. Also, the Crown has ownership of all navigable rivers, since the Crown Coal Mines Act of 1903.

Marama Muru-Lanning’s very interesting and readable book Tupuna Awa: People and Politics of the Waikato River (Auckland University Press, 2016) describes the way Maori customary rights and responsibilities around the Waikato River have been changed with the rise of the corporate model in the last 20 years.

Iwi have seen their roles redefined, and have had to accept this in order to keep a place at the negotiating table. A generation ago, iwi were kaitiaki or guardians of the Waikato River; they have now been reclassified as “stakeholders”.

One interesting New Zealand water-related development is the signing this year of legislation that gives legal personhood to the Whanganui River. This is a world-first, and it is connected to a local iwi Treaty settlement. It is not clear whether this is a unique occurrence, or whether it could set a precedent for other waterways.

The water bottlers – who are they?

Water bottling plants are owned by a range of large-scale, mostly international businesses, including Coca-cola, which takes a large amount of water from the Blue Spring via the Putaruru town water supply for its Kiwi Blue water label. There are also some locally owned bottling initiatives, but generally they’re not small-scale enterprises. They’re companies with pockets deep enough to influence local media and buy community support.

Under the current system water is a resource, which is managed under the Resource Management Act. Local councils have the job of granting resource consents on a first-come, first-served basis. But lacking a national water management framework, they each have to manage as best as they can, reinventing the wheel in their own region.

Commented Bryce Johnson, Fish & Game’s long-serving CEO until his retirement earlier this year: “In order to get seventeen local and regional councils to go in the same direction you need a National Policy Statement on water management.” (Radio New Zealand National, 27 April, 2017)

There’s a constant tension between local and national government power. In 2009 the Canterbury Regional Council was making a decent multi-party attempt at managing water in the region, when it was sacked by central government because it wasn’t moving fast enough for business interests. (The consequences of that are the dried up and polluted rivers of Canterbury, which have had all their water used up by intensive dairy operations.)

The RMA is not an effective way to manage water in a holistic sense. It suits businesses who use water directly to make money, e.g. farms. But other kinds of business also use water as a resource: the tourism industry depends on beautiful clean, flowing waterways, but can’t apply for resource consents to use set amounts of water.

Another water issue that gets people (including me) upset is water quality. Again, the national government has been providing dodgy leadership on this one. Their national water quality statement seemed to take polluted, unswimmable rivers as an unavoidable reality. The updated version, released in February this year, seemed to be an improvement, but is actually worse. A closer look reveals that the figures have been massaged to make them look better – leaving out many rivers and waterways.

Local and regional councils are held responsible for water quality in their region, without constructive national leadership. This makes things very difficult for local government leaders.

The Waikato Regional Council has a water policy document called Healthy Rivers-Wai Ora, which is hugely complicated and confusing. I’ve taken part in consultations and I’m still not sure what it’s actually aiming to achieve, and who’s driving it. There were questions like “Would you rather pay much higher rates or have clean waterways?” (This is a paraphrase, but it was that sort of thing.)

On the same week that Marama Muru-Lanning’s book was released, in September 2016, the Waikato Regional Council narrowly voted to keep Healthy Rivers-Wai Ora going through consultation. It was so close that the chair, Paula Southgate, had to use her casting vote. The councillors who voted against it were farming-business representatives.

Farmers are encouraged to plant along waterways on their property, to reduce the runoff from stock effluent, fertilizers and other chemicals into waterways. Many farmers are doing this – I’ve seen claims that 95% of farms have riparian planting. However, I was very disappointed earlier this year to see very little riparian planting along the hugely popular Te Waihou Walkway to the Blue Spring near Putaruru. 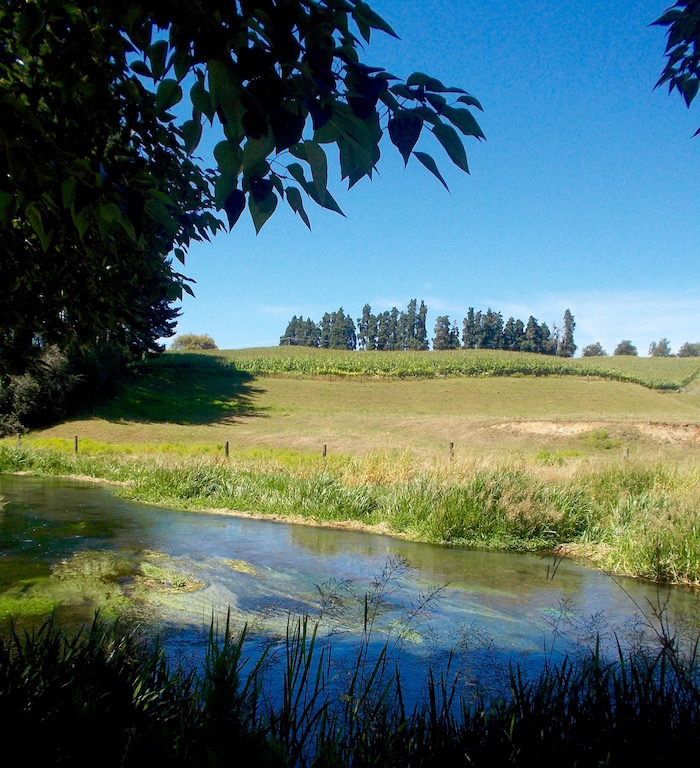 Along Te Waihou Walkway – this doesn’t look like riparian planting to me.

Central government needs to take action and provide leadership in the area of water management. This will be challenging, complex and difficult, and however it is done, it will be unpopular with some people. I can find it in my heart to have some compassion for the government when I think about this. But I’m not letting them off the hook.

No matter which parties are in government in six weeks’ time, working towards a national, holistic, fair water management framework, that’s in the interests of all New Zealanders, should be a central priority.

Nicole Buxeda’s article, published on The Spinoff, comparing the water policies of political parties ahead of the September general election.

The Morgan Foundation has several well-reasoned articles on water issues.

I am grateful to my son, Tom Bannister, for helping me understand some of the legal ramifications around water. However, any mistakes are mine and not his.