Mangroves aren’t one of nature’s cuddly or conventionally beautiful organisms. In New Zealand mangroves are both a protected native species and a pest. This is a post about appreciating our local mangroves: Avicennia marina subsp australasica, also called manawa, the grey mangrove. 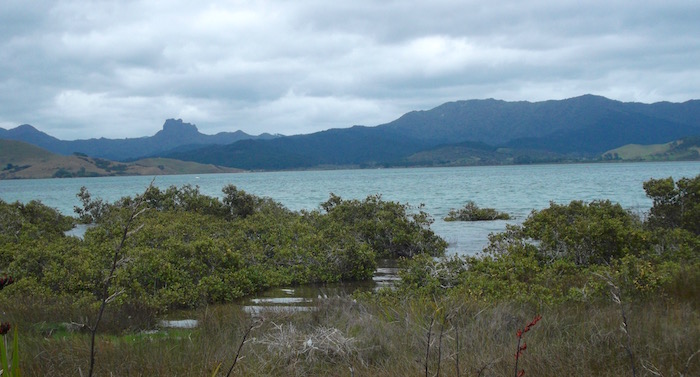 Mangroves in the harbour at Matarangi, on the Coromandel Peninsula

Mangroves have tough, grey-green leaves and knobbly dark trunks and branches. They aren’t sculptural, like other icons of the New Zealand landscape, nikau, cabbage trees and flax. They don’t have pretty flowers, like kowhai, manuka or pohutukawa. They’re not edible or even obviously useful to humans – you can’t build houses or weave baskets from them. And nobody has (yet) discovered that mangroves can cure cancer. It’s hard to feel an emotional connection to mangroves.

When I was five my family spent a memorable holiday at Whananaki, staying in a family bach lent to us by the very kind Deirdre and Ranginui Walker. It was in a row of tiny baches along one side of the tidal harbour. I remember the excitement of watching my father spearing flounder in front of the house as the tide came in.

Mangroves live in the intertidal zones of sheltered coastlines and estuaries. Give me a muddy tidal estuary any day, over a white sand swimming beach or a black sand surfing beach. I’m not a sunbather, and I find New Zealand seawater too cold for swimming, most of the year. In a tidal estuary I love the dramatic daily pattern of the sea retreating and returning.

We only have one kind of mangrove: Avicennia marina subsp australasica, otherwise known as the grey mangrove or manawa. It is native to New Zealand. This species is also found in southern parts of the Australian coastline, Lord Howe Island and New Caledonia.

Mangroves only grow in the North Island, from the far north to Kawhia on the west coast and Ohiwa Harbour on the east coast. Further south it’s too cold.

The grey mangrove can grow and reproduce in a variety of tidal and climate conditions, and is very variable in growth patterns. Northland mangroves are far larger than the small, stunted looking bushes along the much colder Kawhia Harbour.

Where to find mangroves:

Just across from the Treaty House at Waitangi, there’s a truly memorable boardwalk through a mangrove forest.

Paddling a kayak from Wenderholm Regional Park up the Puhoi River is a beautiful opportunity to get face to face with mangroves. www.puhoirivercanoes.co.nz

Tidal mudflats in many harbours

If you don’t mind muddy feet, walking on a mudflat at low tide you will encounter mangroves along the edge of the harbour. The spikes sticking up out of the mud are mangrove roots. 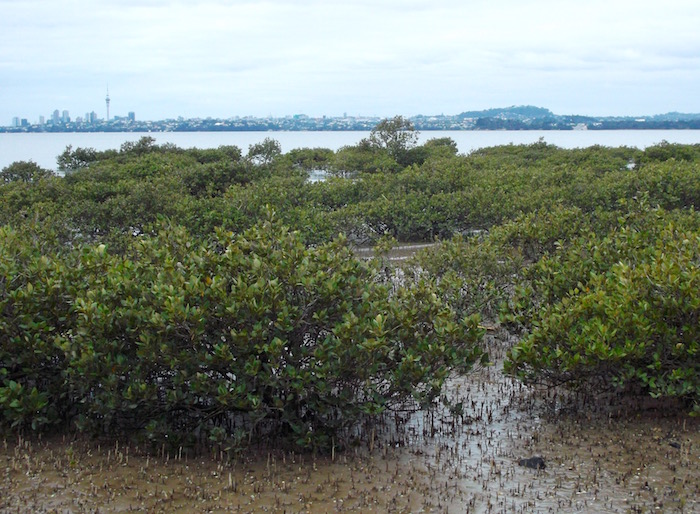 Mangroves on the Te Atatatu Peninsula in Auckland Harbour, looking across to Auckland city. The volcano at right is Mt Eden (Maugawhau).

Both a taonga and a pest

I have some sympathy for property owners. If I lived alongside a beautiful sandy beach, I’d probably be very annoyed if mangroves started turning my beach into a mudflat.

Mangroves on the move

Mangroves are expanding in quite a few areas in New Zealand, mainly due to human development. Mangroves thrive where there is nutrient runoff from the land. This happens mainly because of removal of native bush in the catchment area for agriculture, forestry and urban development.

Local councils and property owners have put considerable resources into getting rid of mangroves, with limited success. In the Bay of Plenty there have been substantial removals of mangroves, both legal and illegal. These range from community initiatives to pull out mangrove seedlings by hand, to large-scale removal of complete mangrove forests using machinery.

Councils and developers have found that it’s difficult to get rid of mangroves. The removal often creates other problems. The ecosystem is disrupted, the mangrove debris makes a mess of the beach and harbour, and it contributes to CO2 emissions. The mangroves may grow back, and it doesn’t stop them continuing to turn up in other places where they’re also not welcome.

And, in many cases, the area does not return to being a white sand beach.

More local research is needed on how to deal effectively with mangroves.

Mangroves – what do they do?

From an ecological point of view grey mangroves are an important part of the landscape dynamics of coastal ecosystems. But their role is complicated and subtle. There is no single bird, fish or other organism that depends completely on mangroves for its habitat, but many species are associated with the ecological system that includes mangroves. Tropical mangroves play a key role in protecting the land from storms, erosion and tsunami, but it is not clear whether this is the case with New Zealand’s single species mangrove forests. Most mangrove research has focused on tropical and subtropical mangroves. There is still a lot to learn about mangroves in temperate regions. 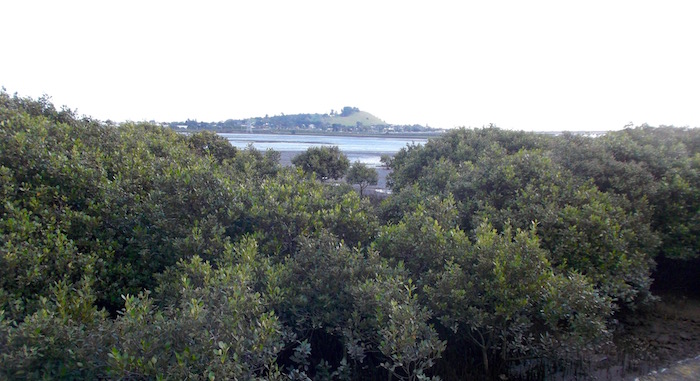 Mangroves alongside the Manukau Harbour, looking south to Mangere Mountain.

NIWA scientist Donald Morrisey and his colleagues point out that what applies to tropical and subtropical mangroves does not necessarily apply to temperate mangroves. Even research from temperate zones in Australia is not always relevant here. (See the references section at the end of this post.)

Morrisey and his colleagues also say that there is considerable variation in mangrove behaviour within regions in New Zealand. The grey mangrove is a highly resilient, adaptive species that can behave differently in a variety of situations. They suggest that management of mangroves should be carried out on a case by case basis.

There are several local research projects underway. My brother Richard Bulmer has been working on a PhD project on mangroves in the Bay of Plenty.

The outlook for mangroves

While mangroves are threatened in most places, the outlook in New Zealand is complex. On one hand, urban sprawl and coastal developments mean mangrove habitats will be lost or changed. On the other hand, nutrient runoff from large catchment areas means mangroves will have opportunities to colonise new areas.

Global warming is likely to favour New Zealand mangroves. On the other hand, rising sea levels may impact on mangrove habitat in some places.

Overall, it seems likely that grey mangroves will continue to adapt and thrive in New Zealand.

However, we humans still have a lot to learn about living with mangroves.

Thanks to Richard Bulmer for recommending some interesting articles. Any mistakes are my responsibility.

This article is largely based on the following scientific papers.