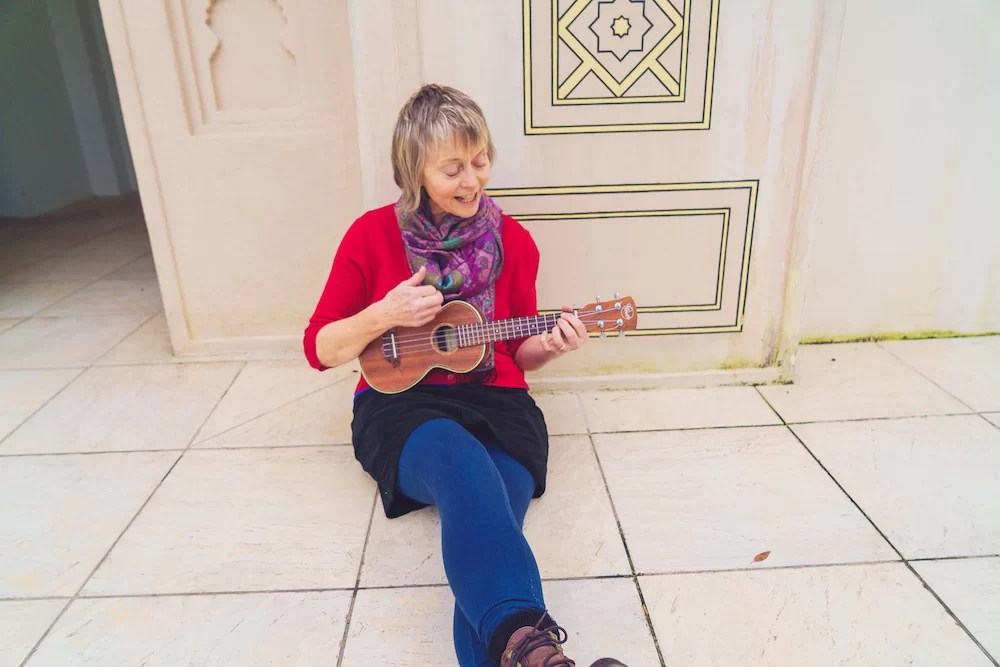 How to write a song:

“I’d like to write songs, but I don’t know how to start. How do I choose a good songwriting course?”

I have a family full of songwriters. My husband, Matthew, has been writing songs constantly since he was 18 years old. My mother, Sue, wrote songs.  My brother, my nephew and my sons write songs.

I wrote my first song when I was eight. But I don’t write songs as often as I’d like to.

Most of the songwriters I know personally, or know about, have never been to a songwriting course. And they don’t read books about how to write songs. They just do it.

How to catch a song

Here’s how songwriting works, based on my experience and observation.

You catch a song. Like catching a dream, or an idea, a poem, a story.

You have to allow time and space for this to happen.

And then after that, you spend time crafting your song, polishing it to let it reveal itself. Like a jeweller working on a precious stone.

Maybe this sounds a bit magical and “woo”. And that’s because it is, in my opinion.

Songwriting is an example of creativity, where you are working/playing with the completely non-tangible, to create something that’s also non-tangible.

This goes way beyond turning straw into gold!

Songwriting workshops and courses can be useful for accountability, to connect with people in the music business, and to find out some of the tricks of the songwriting trade.

But you don’t need to do a course to write a song.

Shifting to another, related art form: do you need to take a creative writing course to become a poet?

Here’s what you need to write a song

The basic elements of a song are: rhythm; harmony/ chords; melody/ tune; and lyrics/ words.

You can start with any of these pieces and add the others. Every single songwriter I’ve known does this differently.

If you’re a collaborative songwriter, you may come up with one or two of the elements and your collaborator(s) or bandmates provide the others.

There are some interesting examples of songwriting process in Peter Jackson’s Beatles documentary Get Back. Paul McCartney successfully workshops the song “Get Back”. While George Harrison gets very little response from his bandmates for the songs he brings to the group.

You probably have all the songwriting tools at hand already. Here’s the main three:

1. You’ll need a harmony instrument. Like a guitar, ukulele or piano. It’s hard to write songs on a melody instrument like a violin. Trust me, I’ve tried!

2. You’ll need your voice, so you can sing the words and tune.

3. And you’ll need to record your song, so you catch it before it blows away. You don’t need fancy recording gear to start with. A phone or the recording software on your computer will do.

Don’t wait till the song is finished.

Catch the pieces as you get them.

Last night I woke when my husband Matthew got out of bed. He went down the hall.

After about ten minutes he returned.

“Having trouble sleeping?” I asked, as he snuggled in beside me.

“No, I was just recording a song,” he replied. He woke with a fragment of song in his head and quickly recorded it.

If you don’t do this, there’s a big chance you’ll have forgotten it by morning.

It’s quite possible that some of my potential songs have disappeared because I preferred to stay asleep in my warm bed!

Another songwriting tool is a notebook where you keep phrases and ideas, which might come in handy if you come up with a tune but don’t have words.

Just once, I woke up one morning with a whole song: the melody and words and chords.

I didn’t quite believe what I had received. I spent several weeks trying to write a second verse, before I accepted that the song was complete, just the way it was.

It doesn’t usually work that way.

Mostly, songs come in fragments and glimpses that need to be crafted.

You have to make space and time for songs to take shape.

Write the kind of songs you love to sing

Song lyrics can be personal, or not. It’s your choice.

Do you have a story to tell, about your experience or someone else’s?

What do you want to say?

“There’s no faster way you can send a message than singing a song,” says African songwriter Dorothy Masuku.

The metre of a melody dictates which kind of words go with it, Matthew says.  “There has to be a match between words and music, or the song won’t work.”

It’s hard to predetermine what a song is about, he says. “Better to just sing words that fit the tune until you have a very good idea what you want to say, at which point you can get more focused.”

Knowing about music structure can be helpful. It can be useful to have some idea of the typical structure/ harmony of your favourite songs.

But hold this lightly. You don’t want to write a song that’s a direct copy of something else. In the worst-case scenario, that’s plagiarism.

Also, many great songwriters have ignored conventional structure and harmony.

Many pop songs have two parts: a verse, and another part that’s called the “middle 8”. There’s sometimes another part, the “bridge”, as well.

Blues songs often have a 12-bar blues harmony/ rhythm structure. But there are plenty of exceptions.

Country and folk-style songs tend to have a verse-chorus structure.

I know people who started writing songs when they were inexperienced musicians, barely beyond beginner in their guitar skills.

When you’ve been listening to music since childhood, you’ll have an unconscious grasp of song structure.

If you want to write songs, but you’re not already doing it, there’s something else going on.

It’s quite likely that you have some mindset stuff, unconscious programs running, that are discouraging you from songwriting.

We all have some of these. Me too.

Writing a song is a super-vulnerable thing to do. (Let alone sharing it with the world.)

Get curious. Listen for the internal voices that may be saying you can’t do this.

Capture them and write them down. And then you can deal with them.

Helping people resolve mindset issues is an area of skill for many life coaches.

I’ve had great results from doing mindset work myself. I wouldn’t have believed it if I hadn’t experienced it personally.

Getting used to my voice

Last year I was contacted by someone who’d found and loved my song on a Flying Nun compilation from 1993. He wanted to find out about my backlog of songs that had never appeared on a record.

Sadly, I had to say that there is no backlog. Most of the factors that stop people from writing songs apply to me.

The main one, the dealbreaker for me, was that I was terrified of singing. I didn’t get used to the sound of my voice until I started teaching ukulele.

First, I had to resolve the PTSD settings in my nervous system. I had about six months of somatic experiencing sessions with a trauma specialist. And then after that I had to gradually awaken my rusty, unused voice. It’s an ongoing process.

You don’t need a course to write a song

If you want to write songs, you have to make time and space to allow songs to come through.

And then keep going.

You’ll get more confident by doing it. When you have written one song, you’ll know you can write another. And another…

A song is something magical, transformational. It’s a piece of treasure, a divine gift.

And it needs a person to birth it into the world.

Could that be you?

It’s full of my favourite tips for regaining your feeling of playfulness.

Here’s where you sign up: 12 Creativity Hacks for Musicians.