Jim O’Gorman: hands in the dirt 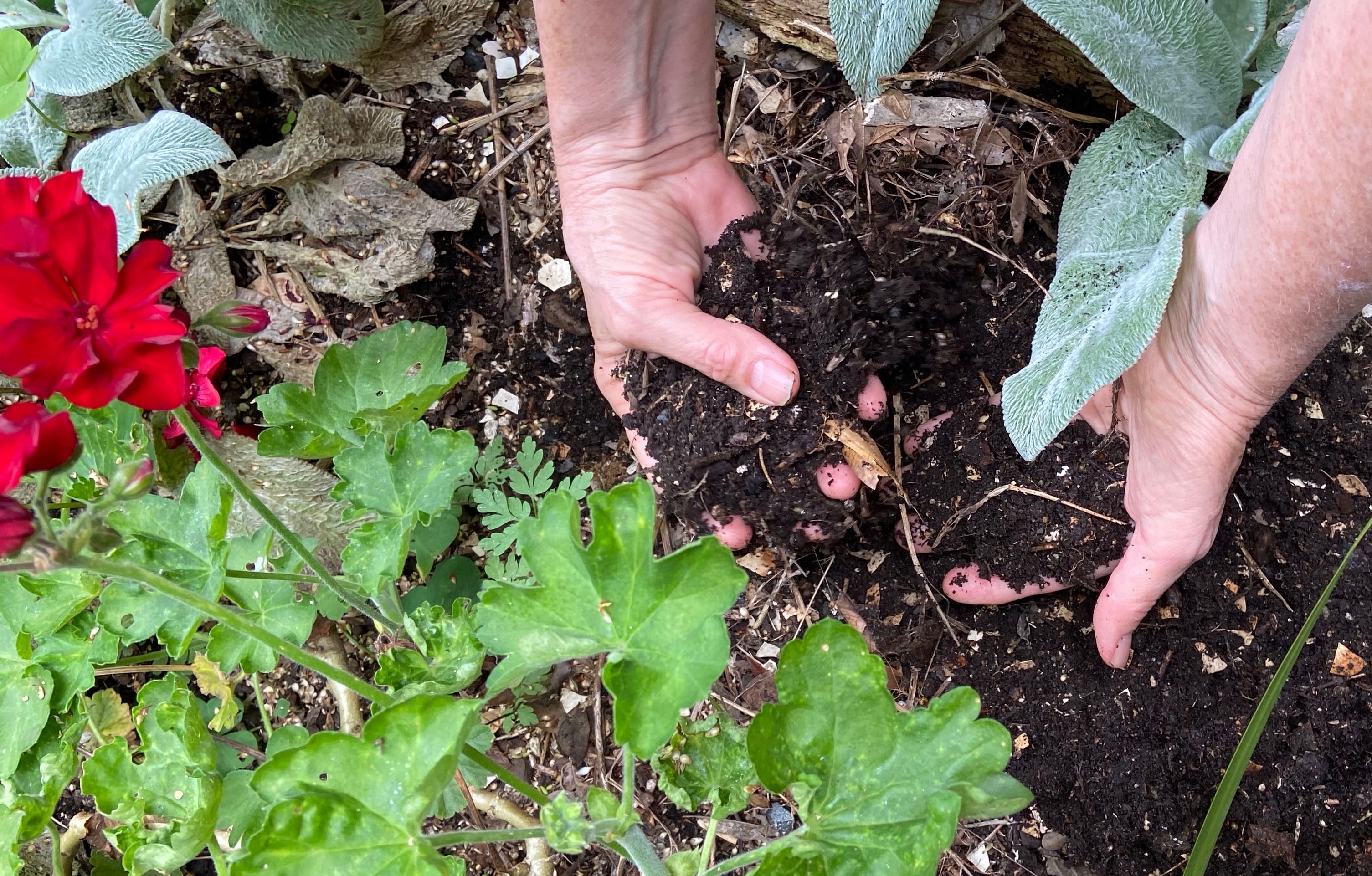 Jim O’Gorman is a New Zealander whose life’s work is aimed at solving some of the big problems of our times: topsoil loss and land degradation.

Jim, who’s been dubbed “the Dirt Doctor”, grows superb vegetables and researches soil care and remediation. His research lab is a tiny 0.57 ha property at Kakanui, a small village on the east coast of New Zealand’s South Island, north of Dunedin.

He’s recognized internationally for his research into the technology of building living soil.

And his produce is sought by top chefs all over Aotearoa-New Zealand.

Jim was invited to speak at the Organic World Congress in France in September 2020, but the event was derailed by Covid.

His collaborative, long-term research project documents the use of low-tech, hands-on soil care systems to grow high-quality produce, while not just maintaining but improving soil fertility.

He has been growing tomatoes and other vegetables on the same piece of land for two decades. Far from being depleted, the soil is healthier than when he started. 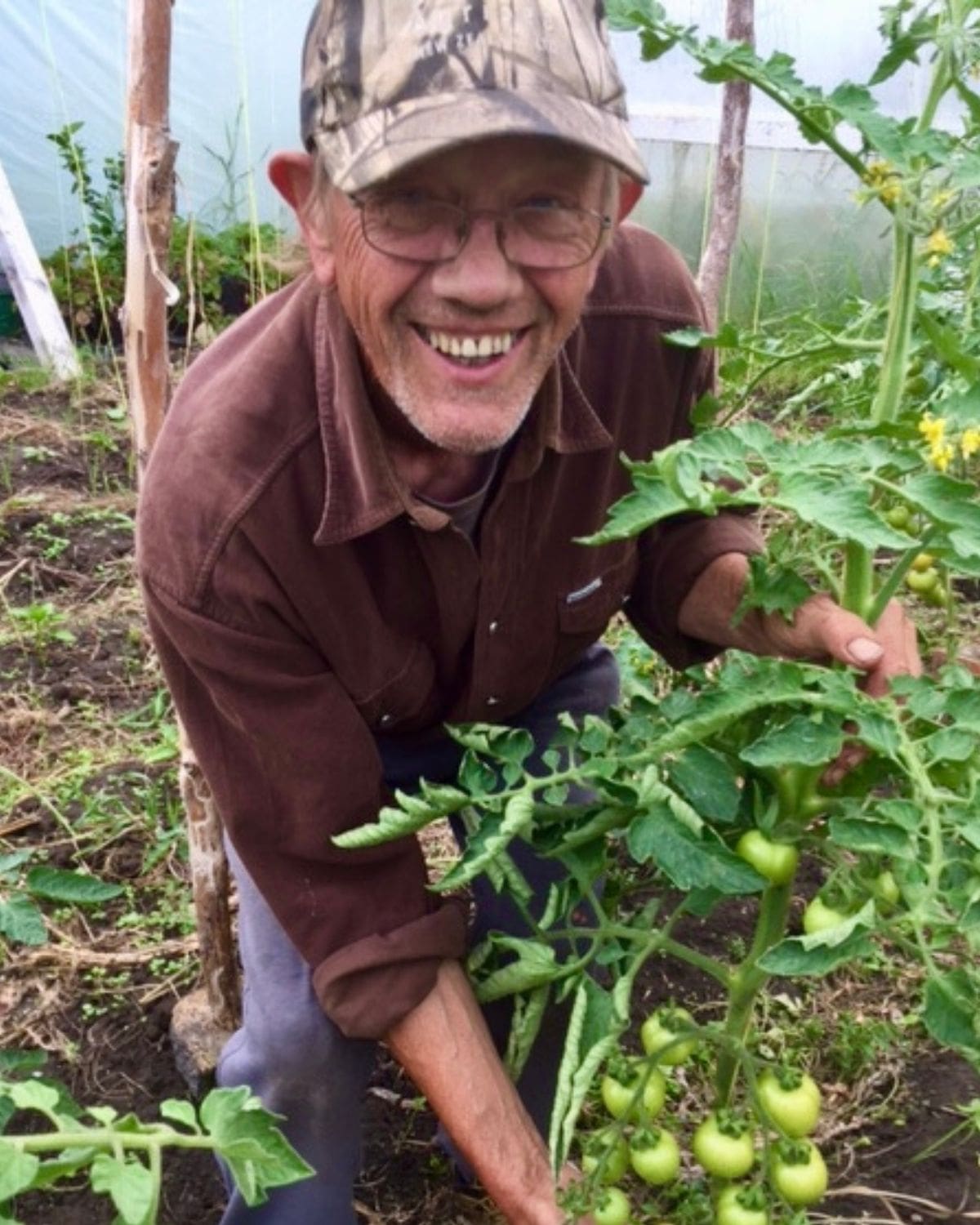 Jim O’Gorman has been growing vegetables on the same land for more than two decades and the soil is in better condition than when he started. Photos of Jim and his property are by David Neilson.

Jim’s work is a valuable contribution to the body of replicable research into the effectiveness of regenerative and/or organic growing practices.

Jim’s research is done through the independent institute, The School for Environmental Recovery. Collaborators have included researchers in Japan and at the University of Otago.

He’s also a social activist who intends his research to be useful for small-scale farmers in poorer regions of the world, where food production is challenging.

Rather than argue the toss with terms like organic and regenerative agriculture, Jim prefers the term “agro-ecology”.

He says: “Agro-ecology is bringing in the microbiology of soil into the process to bring the soil back to health.  It’s about the ecological balance of the microbes and the chemistry. “

“Chemical based farming does work in the short term. However, agro-ecology is a holistic approach that includes the chemical and the biological. By integrating the two approaches, you get a much better result in a longitudinal sense.  Rebalancing the soil using ecology to bring your chemistry into line – that is what my work shows.”

I first encountered Jim O’Gorman’s famous potatoes long before I met him. My friends Lynda Bardell and Tony Woodhouse were getting married in their backyard, in the Auckland suburb of Sandringham.

The memorable wedding feast featured potatoes all the way from Kakanui. I believe Tony, who’s a lawyer, had helped Jim with some legal matters.

He has featured in various films, including Kathleen Gallagher’s documentary Earth Whisperers Papatūānuku (2009) and Rachel Patching’s documentary “The Dirt Doctor”, screened on BBC Knowledge in 2014. 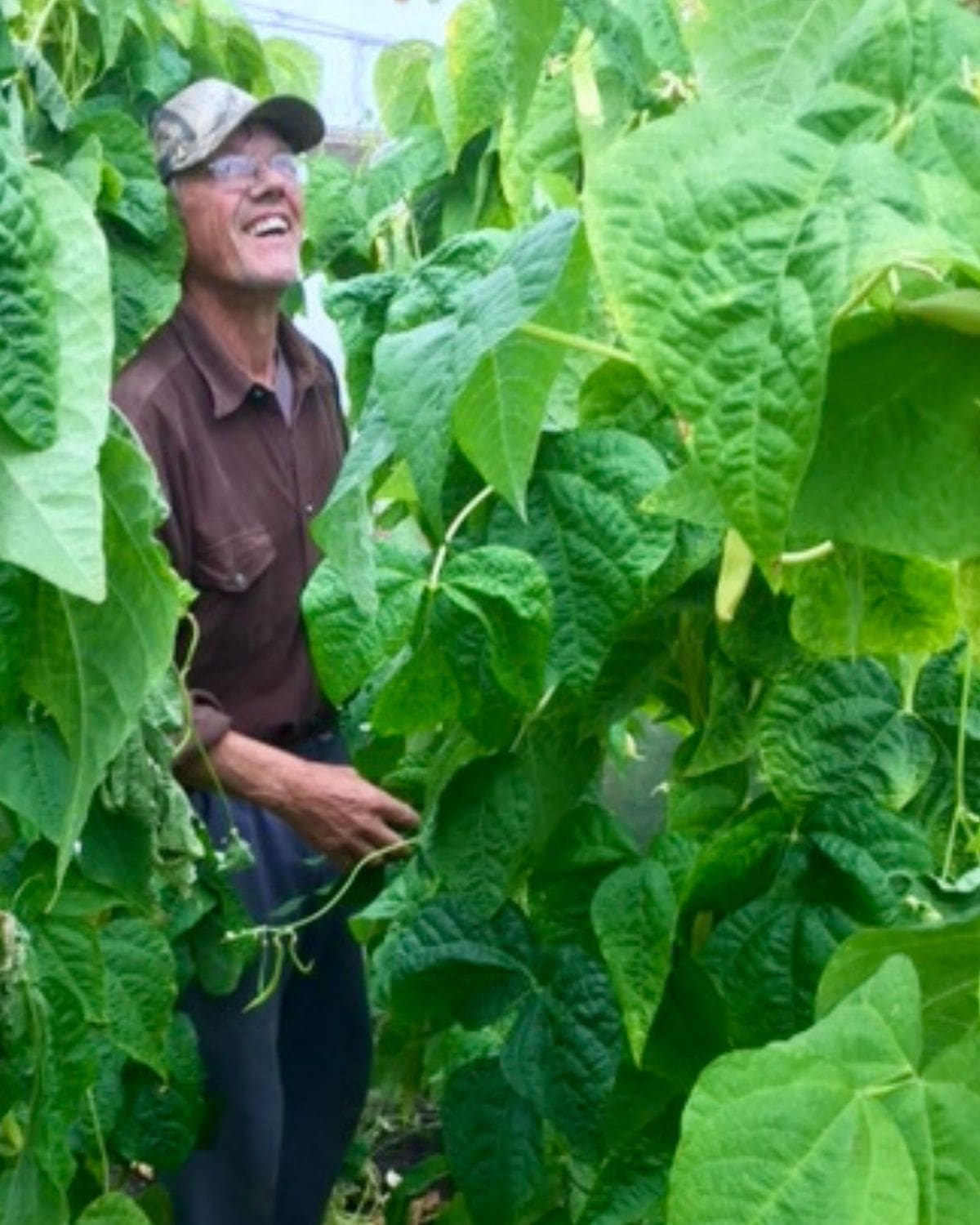 Above: Jim and his flourishing beanstalks.

The next time I ate Jim’s potatoes was in Kakanui. My husband Matthew and I stopped off on our way to Dunedin.

Our friends Melissa Hackell and David Neilson and their family were spending the summer there. Melissa’s one of my ukulele sisters, from our ten-member ukulele band, The Strumbles. She’s an environmental researcher at Waikato Regional Council.

That afternoon Matthew and Melissa roasted a haunch of wild venison, while David and I sat around and poured wine. I love cooking, but I also love watching other people cooking.

And then their neighbour from down the road, Jim O’Gorman, showed up. He was laden with a box of the most amazing vegetables: tomatoes, beans and potatoes, all bursting with life and flavour.

He was also clutching a guitar.

We tuned up and jammed while the potatoes cooked.

After the excellent dinner, we sang all evening. Jim knows a whole lot of scurrilous sea shanties from his days in the navy.

Great music, great food and great friends. And saving the planet. That’s my idea of a good life.

The next morning Matthew and I walked down the road to Jim’s place. It’s a modest, low-tech property with tunnel houses and off-grid buildings, a couple of blocks from Kakanui Beach.

It’s a practical place, not a picture perfect organic display property. There are piles of mulch, barrels of manure, and weeds all over the place. This is intentional. See later in this post for Jim’s take on weeds.

Jim treated us to a guided tour of his tunnel houses, and an up-close demonstration of some of his cultivation methods. 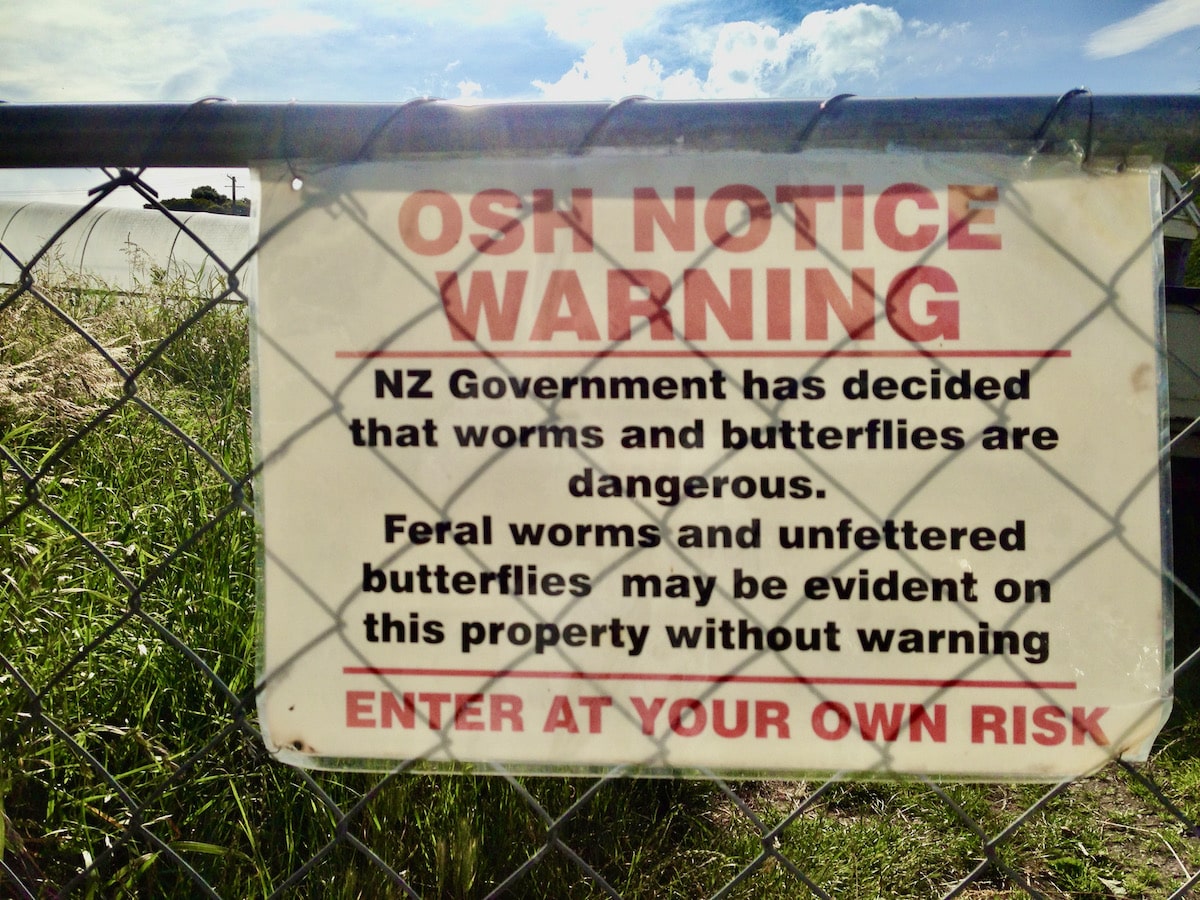 Entering Jim’s property. You have been warned!

Jim started his research project after spending several years in the retail side of the organic food economy.

Jim has led a full and varied life. Having grown up on a pig farm, he spent time in the navy.

In the late 1980s In Dunedin he founded New Zealand’s first retail shop that sold only certified organic produce. His business model was a few steps ahead of the times.

His frustrations at getting a sustainable supply of good quality organic produce motivated him to get into growing food.

Most growers start with the best piece of land they can afford. Jim O’Gorman did the opposite. “I deliberately chose the most agriculturally damaged piece of land I could find.”

His property at Kakanui had been cropped intensively for 35 years, first for growing brassicas and then flowers. Fertilisers, pesticides and herbicides including DDT had been applied for disease and pest control. The land was covered in California thistles and the soil was very dry, compacted and depleted.

In a paper presented at an international organics conference at Lincoln University in 2007, Jim described how he turned the land into a viable organic production unit within 10 years.

“ Just by applying simple biological principles, the soil under my feet has transformed from a weed-infested, rock-hard dust bowl to rich, fertile loam capable of generating several crops each year, while the soil continues to improve in health.”

He says in one of his published research papers: “A degraded piece of horticultural land can be rehabilitated into a viable self-sustaining organic production unit within ten years using micro-biological husbandry and effective weed management.” 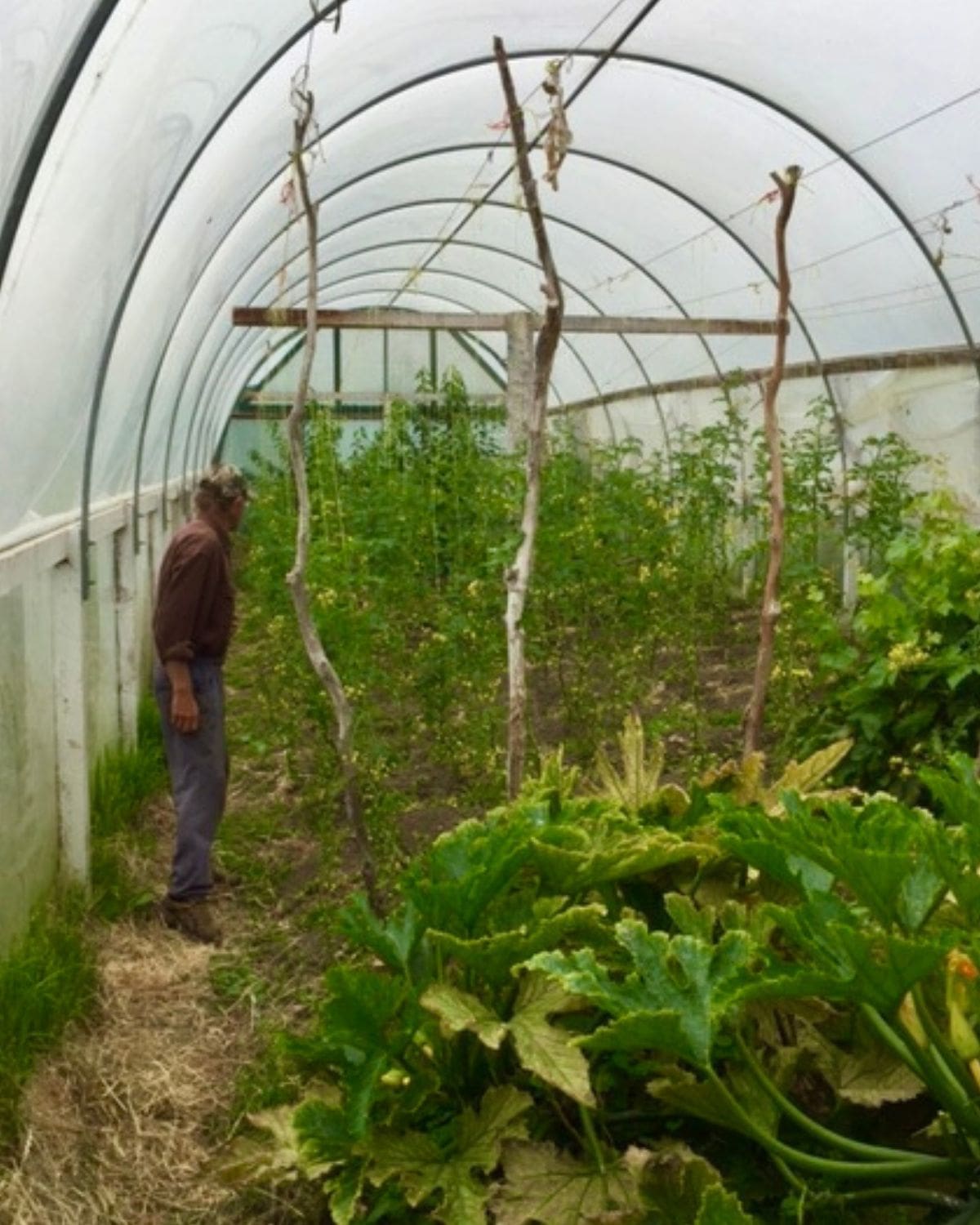 Inside Jim’s tunnel houses. There are weeds, and this is intentional.

Jim O’Gorman’s research is about the technology and science of soil building.

After researching the organic growing literature, Jim used as his starting point the composting methods of Albert Howard and his early 20th century colleagues Eve Balfour and Rudolf Steiner.

He also researched the bio-intensive growing systems developed by John Jeavons.  Another important reference was The Soul of Soil by Joseph Smillie and Grace Gershuny, in which biological systems are connected to soil chemistry.

Regular soil testing is important, Jim says. “Whatever our starting point, it is a good idea to take a soil test. This will identify the soil’s present condition and alert you to any major imbalances which must be addressed.”

“When I first arrived the soil was compacted hard and dry.  I attempted the Jeavons double dig method but had to abandon the idea for several reasons. The soils here are heavy clay based.  The previous owners had farmed with machine and drum for several generations and the land was packed hard when dry and literally like walking in porridge when wet.”

“There was a very small window between wet and dry where the soil could be effectively worked.  There was also a hard pan caused by constant machine tillage to a certain depth and no addition of woody biomass which is the best base for creating long term stable humus.”

Hands in the living soil, full of micro-organisms and fungi.

A general view of weed management is “how to get rid of weeds”. Jim takes a very different approach.

“ Instead of something to be rid of, what if we see them as the biomass which best indicates the health of our soil at that time.”

“In addition to compost, the most important thing we can do for the soil is when weeding, rather than pull the weeds out, cut them off.”

This was the secret that changed his soil’s structure, Jim says.

“When we pull the plant from the ground, roots and all, we are also removing the microorganism mass which we are trying to protect and generate.  It is much better to cut the weed off at ground level.”

“This has a triple benefit. The tops of the weeds can be left on the surface as a mulch to protect the soil, the microbes around the root zone will not be destroyed and the filamentous root hairs, even though they are collapsing, will release nutrients into the soil and hold the soil particles together.”

“These root hairs also provide micro channels for air and water to disseminate into the soil. It is also the area which is most colonised by microorganisms. Removing the roots, removes the little critters as well and leaves the soil with nothing to bind to and so the structure collapses.”

“Do not be afraid to allow weeds to grow with the crop. Weeds only become a problem when they overwhelm the main crop. Until then they can be treated as a living mulch, retaining moisture and when cut just below the surface helping to generate good soil structure via the lignins in their roots.

Weeds provide food for soil organisms and as they collapse create micro-tunnels for water to circulate deeper.”

“As soil is tended over time the weed sward will change from rank grasses, docks, thistles and coarse dominant species to softer annuals. If cut just before seeding, these will form a mulch, retain moisture and release food for worms and macro arthropods and subsequently nutrients for the target crop.”

This is largely because he intends his research to be useful internationally. One of his stated aims is to support small-scale farmers in poorer regions where food production is challenging, to grow food without high-tech tools or inputs. (quote from soilfoodweb post)

Jim says his methods are also similar to those used by traditional small-scale horticulturists in China over many thousands of years.

Jim has found the most useful hand tools for his purposes are not the conventional fork, spade and shovel.

He has developed a range of tools include the “Turver” (or tined hoe), various sizes of chipping hoes and a sharpened bricklayer’s trowel.

“The intent was to create a series of tools that could be effective in most soil types, which would be able to be made from locally sourced and recycled materials. Decisions for tool design were influenced by the need to keep weeding time minimized.” 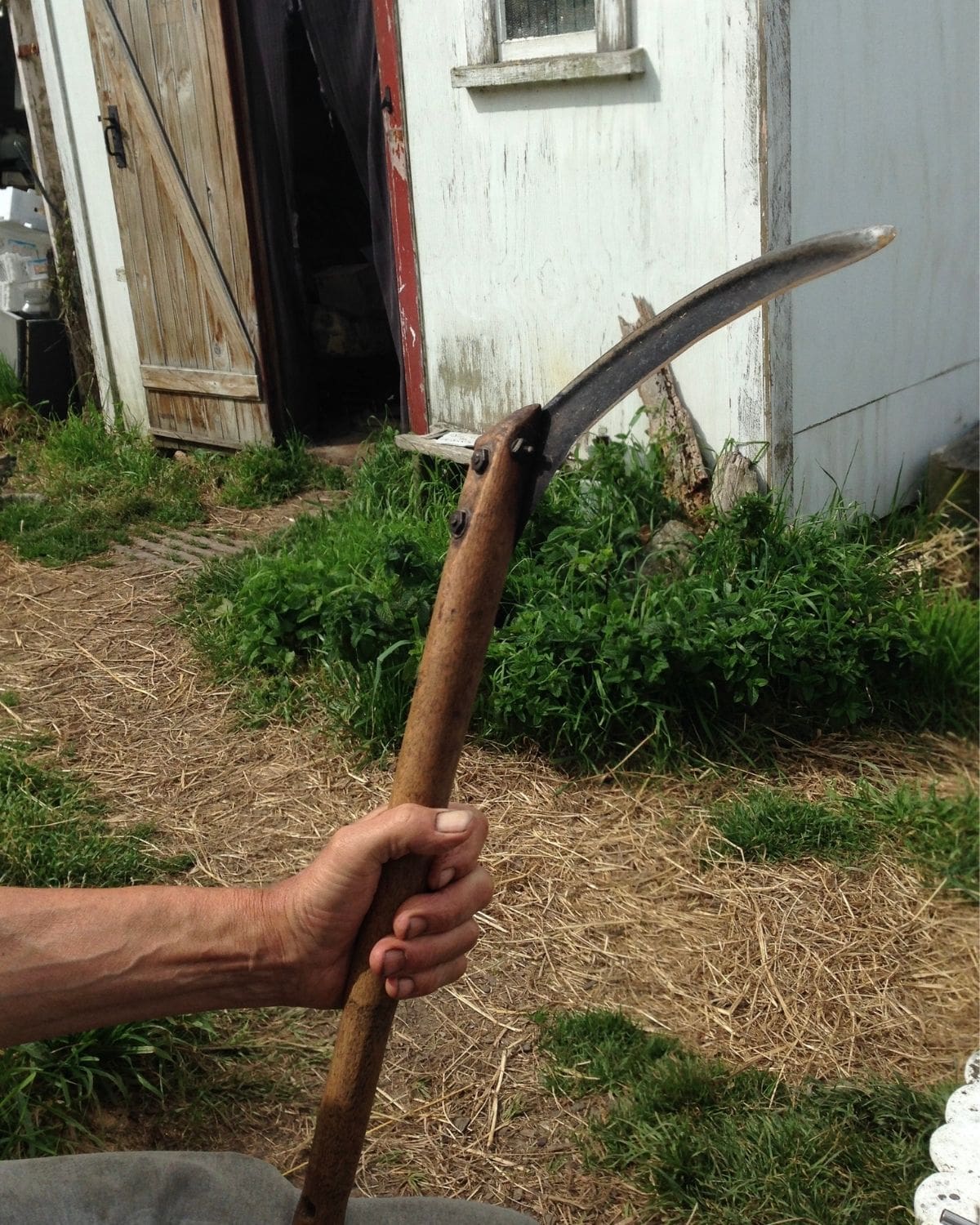 Above: one of Jim’s weed management tools.

You can find more about Jim O’Gorman’s work and research on his website:

David Neilson and Melissa Hackell, for photographs. Because I was so busy eating and making music that I forgot to take photos. As usual.

A tale of the sting: celebrating nettles

Hands in the dirt

My life with green salad