Of the many great organizations we have in the Waikato, one of the absolute treasures is the Time Bank. I’ve tried to explain how the Time Bank works to several friends, and I always end up saying, “It’s really hard to explain. You have to try it yourself, to see what it’s about.”

But my Auckland friends don’t (yet) have any Time Banks to join! So, Lois and Paula, I’ve written this for you.

Basically the Time Bank is a system of local exchange of services (and sometimes goods). It’s an alternative currency, a non-monetary means of exchange.

Cameo the cat in the kiwifruit vine. Photo by Dani Edwards, paid for in Time Bank credits.

I’ve been a member for a couple of years. Here’s how it’s been working for me: 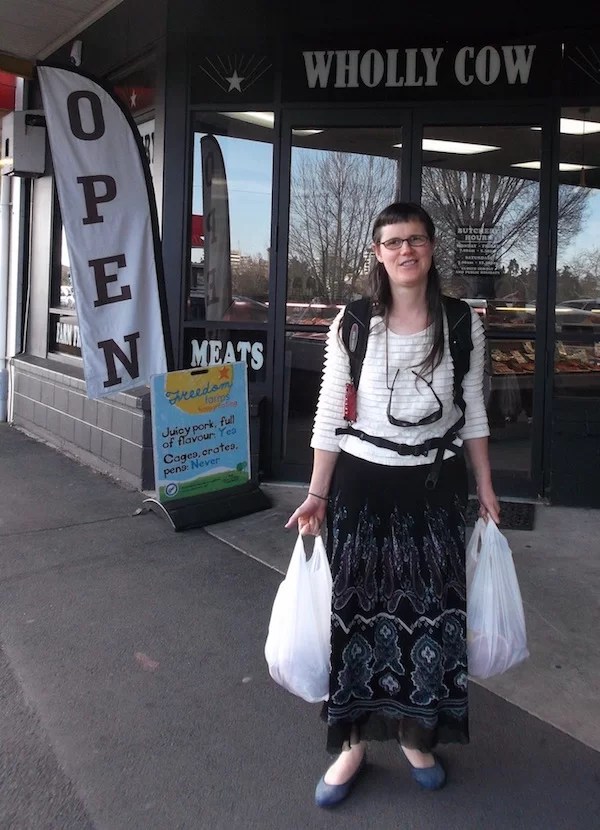 Milanka Mandela on a recent Time Bank shopping trip. She’s coming out of our local butchery, Wholly Cow, laden with excellent Waikato beef and lamb, some of which will go into meals for the Hamilton Homeless Trust.

Other recent Time Bank exchanges have been time management coaching for me (utterly priceless and much needed!), gardening (both giving and receiving) and helping a Time Bank member move house.

Some of my exchanges are with good friends, and some are with people who I’ve met through Time Bank. I’ve also had some wonderful fruit from people’s backyard trees, paid for in Time Bank credits. Sometimes when I’m giving away something I value, I offer it on Time Bank rather than Freecycle, because the exchange feels better than giving it for free.

The main rule with Time Banking is that we are not allowed to offer services that we also do for money. The Time Bank needs to keep a clear separation between taxable monetary income and Time Bank exchanges. For example, I can’t offer ukulele lessons on Time Bank, while I am also getting paid money to teach ukulele. Another beautiful photo paid for with Time Bank credits. This one is by my friend Meliors Simms, who also deserves great credit for persuading me to join in the first place.

The Waikato Time Bank was started in 2012 by Ruth Seabright and the Hamilton Permaculture Trust. The current administrator is Sarah Wolf, who works at Waikato Environment Centre.

Time Banking is an international movement. It was founded in 1980 by American lawyer and social activist Edgar Kahn, author of No More Throw-away People. His aim was to provide a mechanism for valuing work in the non-monetary parts of the economy.

Some of the stated purposes of the Time Bank movement include rebuilding social capital, redefining work, and building connections within communities.

New Zealand’s first Time Bank was in Lyttelton, and there are now quite a few throughout New Zealand, including several in the Christchurch area, in Dunedin, Whakatane, Kaitaia and the Hutt Valley. (But none in Auckland… so far…)

Some of the great things I’ve found about Time Banking

How to join Waikato Time Bank

To join, email Sarah at waikatotimebank@gmail.com, or fill out the form on the website. www.waikato.timebanks.org New members attend an introductory talk – they get two hours’ credit for this.

New members need to provide two forms of ID and a couple of references.

The Time Bank is based on a website, where members post offers and requests, and record transactions. People who don’t have access to a computer can ask another member to help them with this, in return for credits.

There is no obligation or commitment to do anything, even if you’re asked to – you can participate when and if it suits you.

There are semi-regular Time Bank social gatherings and workshops.