All about the bass 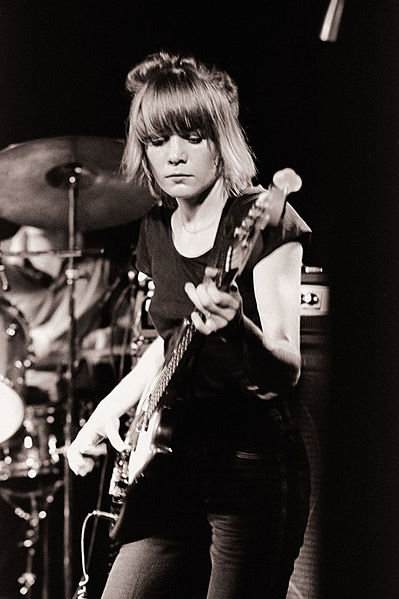 The bass player is the unsung heart of a great band.

They’re standing there on stage with a huge bass guitar, and an even bigger amplifier, but hardly anybody notices what they are playing. The impact of the bass is almost subliminal.

Listening to recorded music, most people don’t consciously hear the bass unless they’re looking for it.

What I love about playing bass in a band is being right in the middle of everything, both harmonically and rhythmically.

Unless you’re a bass aficionado, chances are you’re not sure what the bass player is doing in your favourite music.

Even if you’re a musician, you probably underestimate the bass player. It’s not an instrument for show ponies. (Although there are exceptions, e.g. Bootsy Collins and Flea of the Red Hot Chilli Peppers.)

But, the bass is really important. It anchors both the harmonic framework and the rhythm, in live music and recorded music. 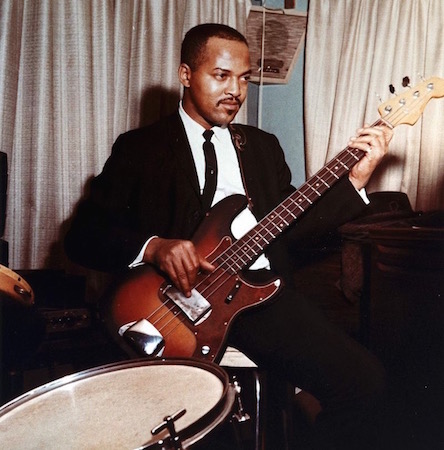 I was lucky to have a great bass player in the first band I was in. Alan Gregg is a low-key, unflashy musician. On stage he sometimes gave the impression that he’d be happier standing behind the amplifier, rather than in front of the audience.

But his playing was and is superb: elegant, musical yet rhythmically tight, and reliable. When I started playing bass guitar, this is always what I was aiming for. 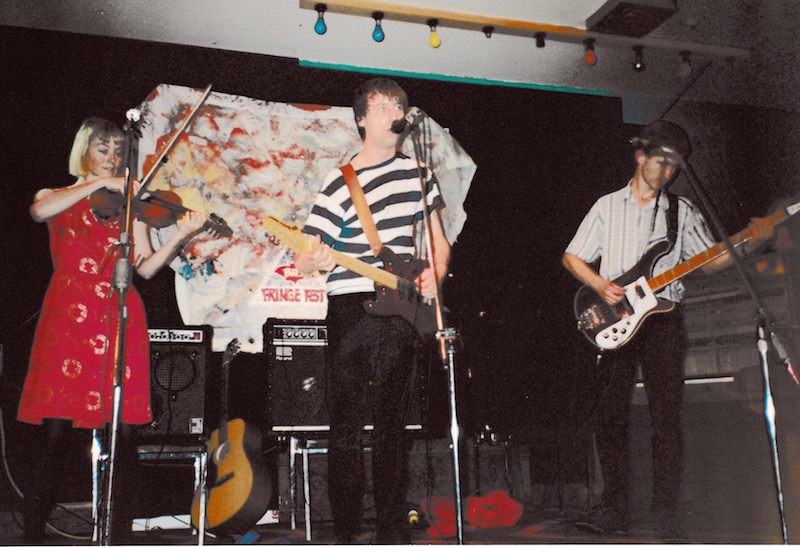 Above, at right: Alan Gregg, one of my favourite bass players. Dribbling Darts of Love playing at the Wellington Fringe Festival 1990. From left: Alice Bulmer, Matthew Bannister, Alan Gregg.

On one level, the role of the bass part can be simple – to augment the rhythm and fill in the sound frequencies not occupied by other instruments and vocals. But it can be a lot more than that.

Quite often the bass player is, in terms of technical skills, the best musician in the band. The Beatles, for example. John Lennon’s first choice for bass player was his best friend, Stuart Sutcliffe, who looked the part, but could barely play.

Paul McCartney (who was also highly proficient on guitar, drums and keyboards) only ended up on bass after Stuart left the band. But Paul McCartney’s bass playing propels the Beatles’ musical legacy. 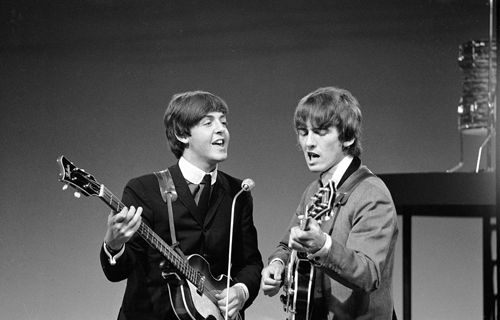 In the mid-20th century the creative role of the bass player was pioneered in R&B and soul, and spread into other musical genres.

With the drummer playing straightforward, clear beats, to appeal to white audiences, the bass player was freed up to augment the rhythm. James Jamerson’s virtuoso bass on “Bernadette” is a good example. You can also hear him on “Ain’t No Mountain High Enough”, “Heard It Through The Grapevine”, etc.

With the evolution of funk, the bass became a star instrument, initially in Sly and the Family Stone and George Clinton’s outfits (Larry Graham was his star bass player).

The electric bass guitar as we know it today came into common use in the 1950s. Before that, the bass player in most musical groups played an upright bass, which is essentially the same instrument as an orchestral double bass.

The home-made low-tech “tea chest bass” was also used in acoustic bands up to the 60s, but in the 21st century it’s mainly a novelty instrument. In my experience the electric bass guitar is much easier to play, in terms of effort and finger strength, than upright bass and tea chest bass.

Bass guitars need to be played with an amplifier. They are not acoustic instruments. There are “acoustic” bass guitars, but they lack the resonance and volume of electric bass. 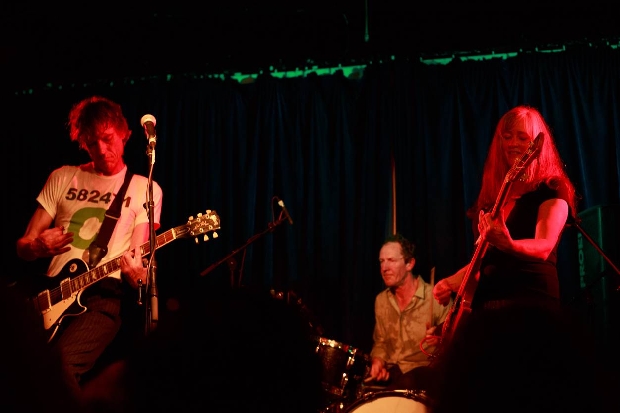 The Verlaines in 2013: From left, Graeme Downes, Robbie Yeats and Jane Dodd on bass guitar. Photo by Erik Winquist.

In the 1960s developments in recording technology, with sound compression, made it possible to boost the bottom end of a recording. This made people more likely to get up and dance.

However, there were technological challenges. Bass frequencies hold more energy. When there was too much bass in a recording, the cutting arm on the record pressing machinery would jump.

Eventually recording industry wizards figured out how to get around this. The result was Led Zeppelin’s monumental sound – and this paved the way for heavy metal, which is the sound of excessive bass, more than anything else.

And in the 1990s there was a string of female bass players in indie rock bands, including Kim Gordon of Sonic Youth, Kim Deal of the Pixies and the Breeders, and Melissa Auf der Maur of Hole and Smashing Pumpkins.

Closer to home, bassist Jane Dodd was a founder member of The Chills before going on to play in The Verlaines and the Able Tasmans, and Kathryn Tyrie played bass in Sneaky Feelings’ original lineup. 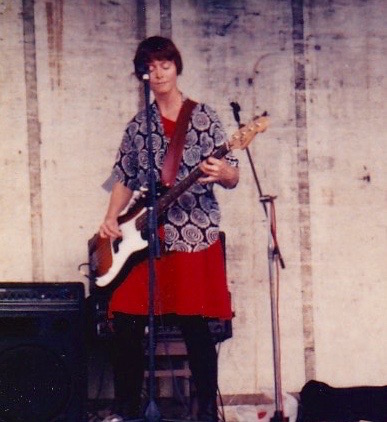 A rare photo of me, early in my bass-playing career.

The bass is an instrument that can be picked up relatively easily by some, but not all, musicians who have skills on other instruments. (In my experience playing a rock drumkit is like that also.)

You don’t have to be able to play the guitar. Bass players don’t usually play chords – just one note at a time. Alan Gregg was a keyboard player before trying his hand at bass. Sneaky Feelings’ first bass player, Kat Tyrie, had played cello. I had played fiddle and keyboards, and a bit of drums, before I picked up a bass guitar.

You don’t know until you try, whether or not you’ll be any good at it. I think it’s partly a knack, an affinity for the bass, but it definitely improves with practice, listening to music and copying the bass lines.

Berklee College of Music in the United States has been offering professional bass guitar training since the mid-1970s. But most of the bass players I know are self-taught. 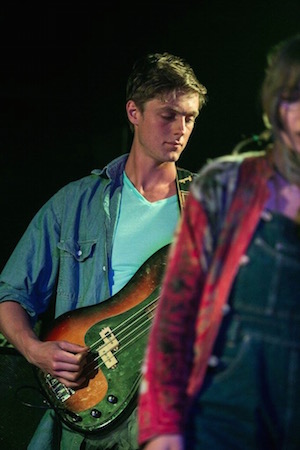 My son the hot bass player, shown here playing with Hamilton band The Goth and The Pixie. As you can see, he’s neither.

There are elegant bass lines – and then there’s too much. My younger son Albert, who is a far more skilled bass player than I ever was, says some bass players “overplay”. By which he means that they play parts which are too complicated. Simpler is usually better.

I played bass in a band for more than ten years. The volume was one of the main reasons I gave up, although it wasn’t the only reason. The electric bass guitar is a loud instrument. Bass frequencies are the hardest to contain when you soundproof a room. If someone drives past you playing their car stereo on maximum volume, it’s the bass that you will hear most.

I hated feeling that I was inflicting noise on people. That’s one of the reasons I didn’t practice enough. Albert doesn’t seem worried about this, which is partly why he’s a much better player than me.

Thanks to my husband Matthew Bannister for his helpful suggestions when I was writing this. Matthew is a terrific guitarist who also appreciates and encourages great bass playing.