Coming to the end of a rug 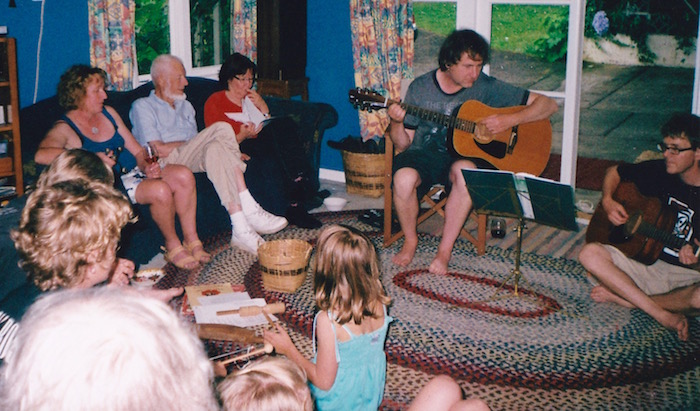 In my living room there is a beautiful handmade rug. It’s a traditional Scandinavian braided rug, made by plaiting long strips of recycled cloth and then coiling the plaits together and hand sewing them into a flat oval rug.

This labour of love was created by my maternal grandmother, Adeline Nordendahl Hirsh. She made it by hand, more than half a century ago, in Pasadena, California. It’s huge – 9 feet by 10 feet. (2.7m by 3m in metrics.)

I love this rug, but it’s gradually decaying beneath my feet. It’s literally coming apart at the seams. Every few months I sit down and stitch some of the coils back together. Now some of the braided fabric is also fraying, to the degree that it’s becoming a hazard underfoot.

But it’s hard to let go of this family heirloom.

Family Christmas in 2007, with the Mormor rug under our feet. Matthew (left) and David (right) with guitars.

I have inherited much more than this rug from my Mormor (Swedish for “mother’s mother”), including my freckles and strawberry blonde colouring, my cheekbones and my height (five feet eight inches).

Any practical skills and “can do” attitude I also attribute to Mormor. She taught me to use a sewing machine.

In the 1960s Southern California was the global capital of the new consumer culture. Hand-making a carpet from recycled fabric must have amounted to countercultural activism.

This was also the period when traditional textiles – wool, silk, linen and cotton – were being replaced with modern synthetics. So my grandmother was making good use of the old generation fabrics that were going out of fashion.

Meanwhile my grandfather’s physicist colleagues at nearby Caltech and JPL were sending guys to the Moon and exploring the far reaches of the galaxy.

From the land of ice and snow

Adeline Nordendahl was born in Jamestown, upstate New York in 1900, the second youngest in a large Swedish family. In the late 1890s her family had emigrated to the United States, from a place called Trehornigsjo, in the north of Sweden, near the border of Lappland.

I visited the region in 2001. It’s beautiful but bleak, and it would be hard to support a large family where it is dark six months of the year. 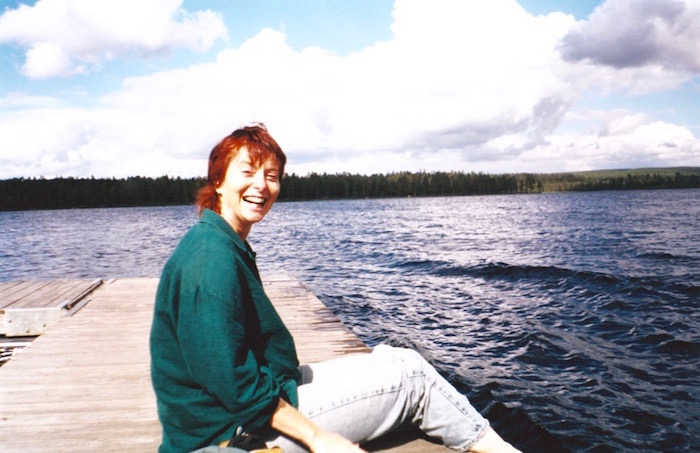 My mother, Susan, thought there was another reason why they left, although nobody talked about it. She believed her grandmother, Kristina, was Sami (Lapp), while her grandfather was from a Swedish farming family. Her grandparents had a culturally and economically “mixed” marriage, which wouldn’t have been approved of by their families.

My social activist mother was incredibly proud to be descended from the indigenous people of northern Scandinavia.

I know very little about my Swedish forebears. Like many migrants in their era, my great-grandparents changed their surname as soon as they arrived in America, from something “unpronounceable and Swedish”, to the somewhat easier Nordendahl.

When Adeline was eleven her father died and she had to leave school to run the household while her mother ran the farm and her older brothers went out to work.

But Adeline was academically motivated and ambitious. In her late teens she went back to school, sitting in classrooms with much younger students. After graduating from high school, she worked for several years in a chocolate factory and saved to go to university.

In 1925 Adeline finally enrolled at Cornell University in Ithaca, which was 180 miles from Jamestown. I’m not sure why she chose Cornell. Possibly it was just the nearest university.

Adeline wanted to become a fashion designer. She was a skilled seamstress, passionately interested in clothes, textiles and style. 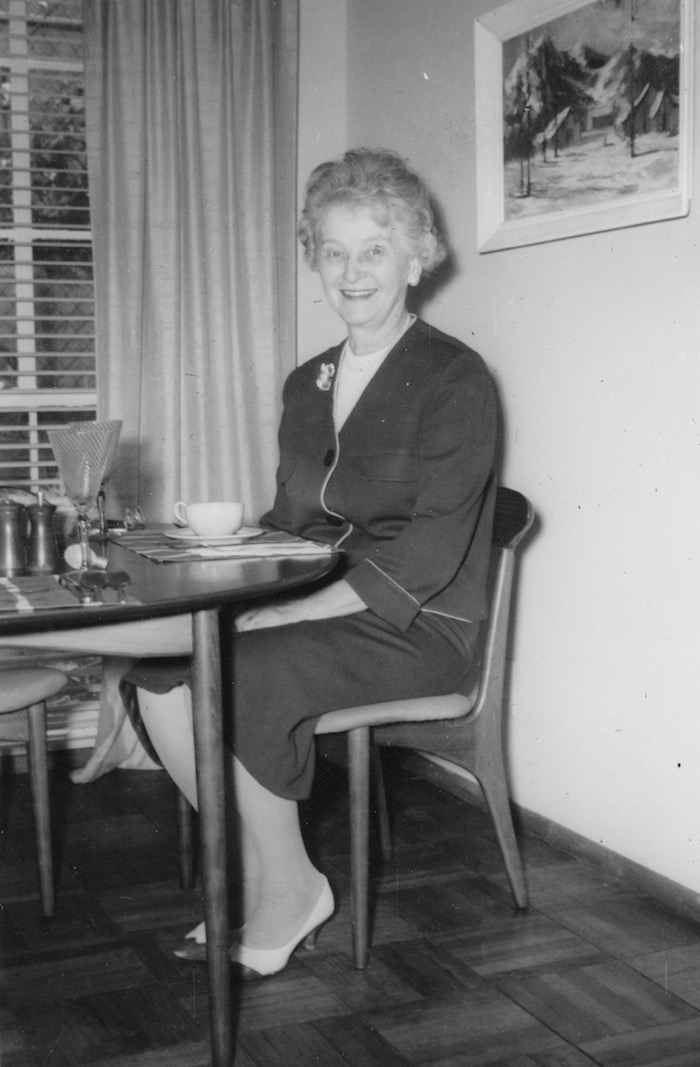 My elegant Mormor, Adeline Nordendahl Hirsh, in her sixties. She probably made the suit she is wearing.

I remember Mormor saying to me that she found her university courses disappointing. They were geared to middle-class girls who were at university to find husbands, rather than an ambitious working-class woman who actually wanted to get into the fashion industry.

But Cornell turned out to be a good marriage market for Adeline too. She met and married Fred Hirsh, who was a postgraduate student in physics.

In 1936 the family moved to Pasadena, California, where Fred did research at Caltech, and later taught at the University of Southern California. 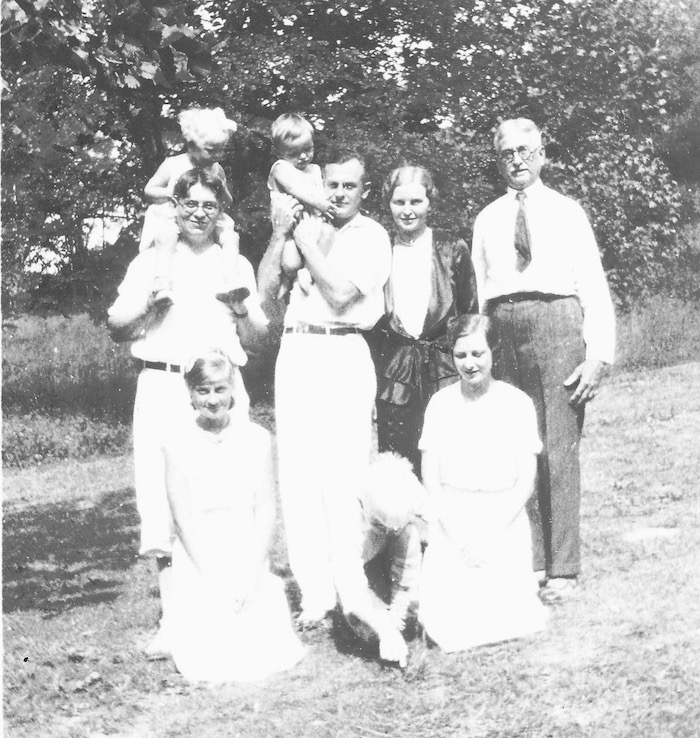 Fred and Adeline in 1931, with some of Fred’s family. Fred is at left with Mary on his shoulders. Adeline is second to right in the back row, next to Fred’s father, Frederick R Hirsh Senior. In the front row are Fred’s siblings, from left, Elise, John (looking down) and Mary. Mary’s husband and her son Petie are between Fred and Adeline.

It wasn’t happy ever after. Fred’s promising career as a physicist was cut short when he was diagnosed with Parkinson’s disease in the late 1930s. He lived with this demoralizing and debilitating condition for more than 30 years, until his death in 1970. There was no cure and there was very little that could be done for him.

Adeline cared for her miserable, invalid husband with calm Swedish endurance. They survived on a small inheritance from Fred’s parents.

In the early 1960s she created the beautiful braided rug that I now have. It must have been at least a year’s work. She had been saving fabric from family coats and suits for many years, to use in the project. 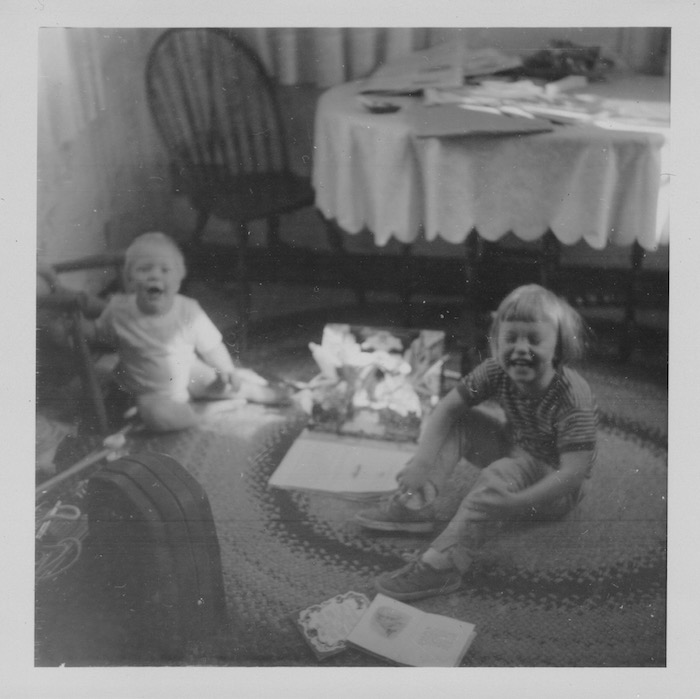 My brother David (18 months) and I (nearly 3) opening our Christmas presents in 1963. It looks like a different Scandinavian rug. Mormor may have made more than one.

In late 1963 we visited our grandparents in Pasadena. It was Christmas time and the house on North Holliston was like Santa’s grotto, crammed with Christmas ornaments of all kinds. There were china figurines of Santa and the reindeer, angel music boxes that played “Silent Night” and gingerbread houses with handmade frosting. Californians go over the top with Christmas, and my grandmother was no exception.

I remember the new braided rug on the floor in the room where my brother and I watched Batman and the Flintstones on a black and white TV. Grandad was watching the news on the new colour TV at the other end of the house. But all the newsreaders had green skin, because the adjustment was wonky.

After Grandad died in 1970, Mormor sold the house and moved into an apartment. The next time she came to visit us in Auckland she brought the braided rug with her. We put it in our TV room, where Pippa, our new puppy, peed on it. The rug seemed none the worse for wear. It was very resilient.

In 1990 I ended up with the “Mormor rug” when nobody else had space for it. Our current living room is exactly the right size and shape. (See the family photo at the top of this post.) 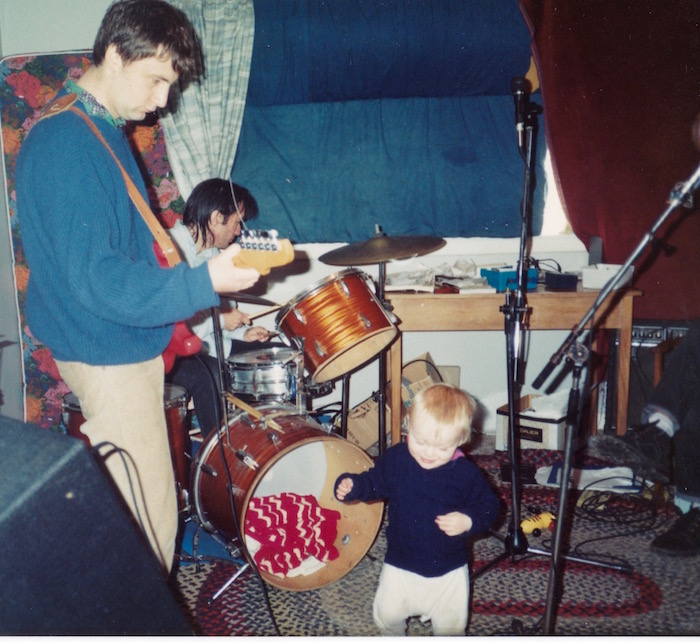 The rug in 1992: Tom (one year old) dances to Sneaky Feelings. They were rehearsing in our messy music room.

But after 50 years it’s coming to the end of its useable life. The thread that holds together the coils is coming apart, and some of the fabric is also fraying. 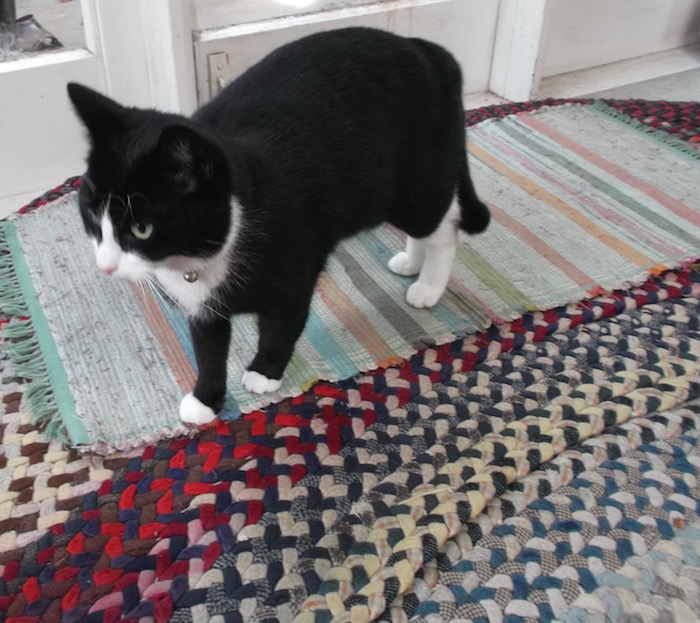 New cat, old rug. Wallace wonders where the next meal is coming from.

Hoping to restore the rug, I enrolled in a fabric craft class taught by local textile artist Vivienne Nye. I learned how to make a tiny coiled mat for a teapot to sit on, and discovered that the process of braiding, coiling and stitching is incredibly time-consuming, and physically and mentally challenging.

Also, the fabric to make this kind of rug is no longer available second-hand. To restore the rug I would have to buy new woolen fabric. This doesn’t make sense to me. And my thrifty Mormor would have thought it a waste of money.

My current plan is to take the rug apart and (eventually) re-stitch the braids that are still in good condition into a couple of smaller rugs for my nieces. And the remains can be mulch for the fruit trees.

I still haven’t quite decided what to do, but this well-loved rug deserves a good ending. It definitely won’t go to a landfill. 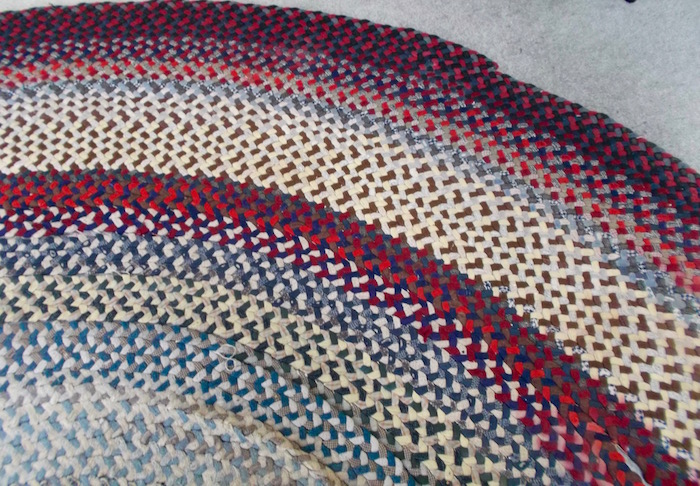